“We have found that conflict resolution is the art

Of working and sharing ourselves,

Our resources, our minds and hearts with others”.

Conflict resolution as an art

I am constantly amazed at the creativity and inventiveness of Palestinians. In Palestine I learn about being human in the face of oppression and find inspiring ideas that we could adopt and adapt to our own society.

An example of this is the Wi’am Conflict Resolution Centre in Bethlehem. The entrance to the Centre, which is quite amazing in itself, is housed in a 19th century Ottoman-era building. But the piece-de-resistance is the gardens. Down stone steps I was immediately engulfed in peace and tranquility brought about by carefully planned sitting areas amid trees, flowers, herbs, and stone walls. The site is multi-purpose and has a children’s playground. Amazing, because in brutal contrast, it is immediately next to the Separation Barrier, built 25′ high in dark grey concrete, with the trade mark watch tower. 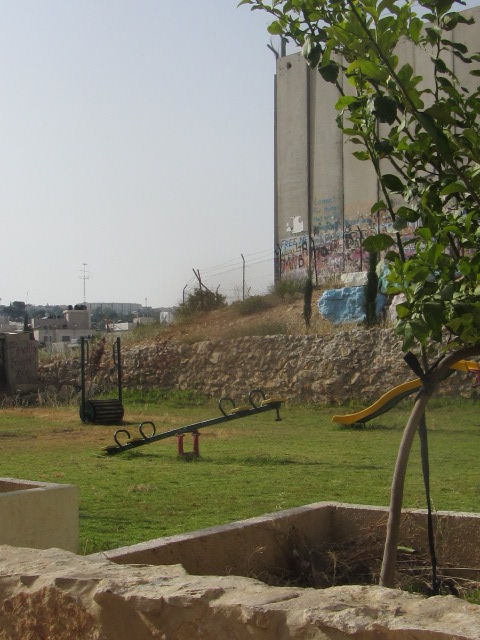 My hosts were the Centre’s founder Zoughbi, and Usuma, who together explained that the idea for the centre came in the first and second intifadas which had caused a breakdown in civil society and disrupted the traditional ways of resolving conflict between neighbours. The Centre was founded in 1994 and aims to be a ‘centre of hope to a people living under occupation’. It uses techniques based on the Sulha Arab tradition of mediation as well as other schools of thought from around the world, a world that “is brimming with the cries of injustice and oppression”. It aims to celebrate a mosaic of differences with a message of hope in a time of hopelessness.

Wi’am is the Arabic word for unconditional love and harmony. I mentioned to Zoughi that I follow a Buddhist path, something that I don’t often do in Palestine as most people do not understand a spiritual path that does not have a deity. I find that you often get involved religious debates with no positive outcome. But Zoughbi, a Palestinian Christian, understood immediately as he had been to India and Japan and met Zen masters, among other spiritual leaders.

Here is a sample of what they do:

Cultural exchange, and creating competencies for social transformation and to work for non-violence. While I was there Nasser, one of the volunteers who had himself been in prison six years, held a workshop with some young men from the Aida Refugee Camp. The subject was proper use of the Internet. The camp is living under constant uncertainty and becomes virtual pressure cooker where the youth, mostly unemployed, can easily fuel their frustrations into non-productive aggression. 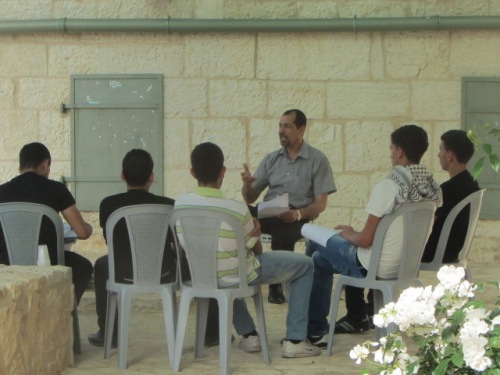 Recognising that Palestine is a patriarchal society and that women suffer from the impact of the occupation the Centre aims to empower women to take part in decision making.

These are available to all in the community.

As Palestinians attempt to heal their society at the grassroots level, there are lessons here that can be learned by everyone, (even the ‘big guns’ like John Kerry who have so far failed even to sit down at the negotiating table).

Comments Off on WI’AM Centre for Conflict Resolution, Bethlehem