Road Sign – In Reality a Symbol of Occupation and Apartheid

As I travel in a ‘Servis’ (7-seater mini bus), from Ramallah to Nablus, I notice the proliferation of new road signs at the road side entrances to Palestinian villages. They remind me of zoo warning signs for dangerous animals! No need to put similar signs in front of settlements – they are well protected from ‘intruders’ by high wire fences and patrolling armed security staff. Palestinians are only allowed to enter settlements if they have a work permit. Settlers, on the other hand, are free to roam Palestinian land at will, even to attack farmers and uproot trees.

How could I get it so wrong? In my last post I said that Tommy Donnellen had been hit by a gas canister. I’ve seen enough wounds by now that I should know the wound was from a steel coated rubber bullet. 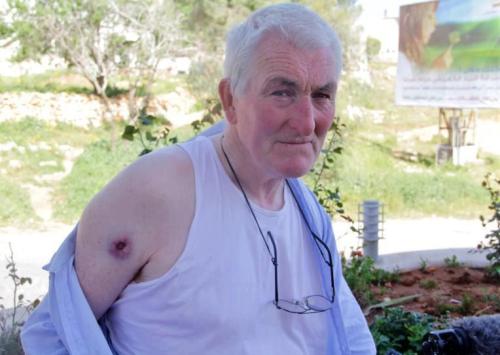 He was standing behind the wall of the petrol station, where I often stand with other photographers, professional and amateur, to snap the interplay between the boy stone throwers (‘shebab’) – and the occupation forces. There were no medics around last Friday so Anne, a French photographer, and I were trying to get some ice on the wound, but he was stoically holding out! Tommy is a relentless activist from Galway Ireland who who has been documenting Palestinian non-violent resistance* for a few years, Maybe that was why he was targeted. I hope that he is healing.

Did a truce ever exist? As I write this, Gaza is being bombarded by Israeli air strikes. In the villages surrounding Ramalla land confiscation goes on for military expansion.

* Friday protests are always essentially non-violent. Peaceful marches are halted by the Israeli occupation forces using skunk water and tear gas, then as the march breaks up teenages (‘shebab’) throw stones at the soldiers, who respond with more tear gas and rubber bullets.