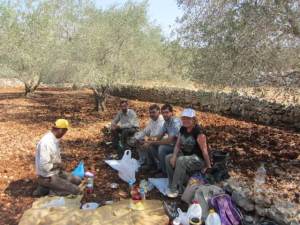 Olive trees are a point of conflict between Palestinians and militant West Bank settlers all year round. Olive trees are often uprooted by settlers, or burned. Sometimes they are enclosed by illegal settlement fences. Yatma farmers have experienced attacks on their olive trees by settlers from the nearby Israeli towns. Frequently farmers are prohibited from accessing trees that are close to settlement boundaries by harassment from armed settlers or by the occupation army. 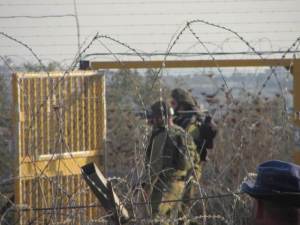 On occasion olives are stolen by settlers. Here. It isn’t clear whether this is an act of simple theft, or a political act to harass Palestinian farmers. Here is an example of a recent attempt to steal olives by settlers. The thieves were sent on their way by the occupation army, but weren’t charged.